What is Difference between Router, Switch, and Hub 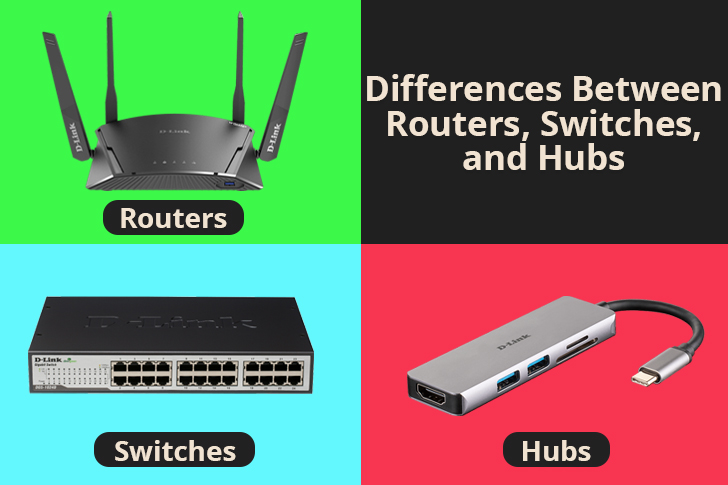 In an Ethernet network, there are some networking devices that play their roles at various levels such as hubs, switches and routers. The functions of the three devices are all quite different from one another, even if sometimes they are all integrated into a single device. due to that, many people feel confused about the differences between the hub, switch, and router. The following part will focus on the topic—hub vs switch vs router, aiming to clarify differences among them.

HubA hub is a type of device that’s commonly used as a connection point for various devices in a Local Area Network (LAN). It works by receiving packets that arrive at one of its multiple ports, copying the packets, and sending them to its other ports so that all LAN segments can see the data.When a single port in the hub responds, all other ports will also receive the response. The hub does not have any capability to distinguish which port it should send a data packet to. As such, all connected devices will receive the response and must determine whether they should accept it or not.In comparison to routers and switches, a hub is the least complex and least expensive device. While they have often been used as a quick and easy way to connect a small network, they are becoming increasingly replaced by switches.

SwitchA Networking Switch is a type of hardware that uses packet switching to receive and forward data to its intended destination within a network. Essentially, a switch is a more efficient, more intelligent version of a hub.Perhaps the biggest difference between a hub and a switch is the way that it delivers data packets. Rather than blindly passing along data to all devices in a network, a switch records the addresses of the connected devices. In doing so, it learns which devices are connected to which ports. Then, when a port receives a data packet, the switch reads its destination address and sends it directly to the intended device in the network instead of every single port. As a result, a switch can greatly improve the speed of networks that receive a lot of traffic.

RouterA router is the most intelligent and complex of the three network connection devices listed in this article. Rather than just forwarding data packets to other devices in a single network, routers are designed to forward data packets between two or more networks, as well as direct traffic between them. They are typically located at gateways and can be programmed to understand, direct, and manipulate network traffic.Many modern routers are designed to integrate the capabilities of a switch and hub router all in a single device. Depending on the application, routers range in size from small broadband devices to large Industrial Wireless Network